The last time I saw Judy Williams at a crime scene, she was at an apartment complex off of West Boulevard on a humid afternoon a couple of Septembers ago. Police cruisers lined the curb, and at the end of them was her minivan, with its distinctive bumper sticker that read, “End the madness, stop the sadness!”

She stood 20 or 30 feet back from the yellow police tape strung between trees. When I walked over to say hello, she shook her head in frustration.

“Tired of it,” she said. “Tired of all this foolishness.”

Ms. Judy, as seemingly everyone calls her, had reason to be tired. As the co-founder of Mothers of Murdered Offspring, or MOM-O, Ms. Judy had visited close to a thousand crime scenes in 25 years by then. Detectives, paramedics, and reporters like me came to expect Ms. Judy, with her candles and purple balloons, as part of the sad milieu that most Charlotteans never experience.

For a quarter-century, Ms. Judy showed up, again and again, offering hugs to grieving family members, staging memorial vigils, and making lapel pins adorned with the victim’s picture. I spent part of 2017 writing about Ms. Judy for Charlotte magazine, which honored her as a “Charlottean of the Year” for her work with MOM-O. At her westside apartment, she unfolded a display board that showed the pictures of more than 700 murder victims that MOM-O memorialized.

On and on, faces lined up in rows like the worst kind of yearbook. We both gasped when I finished counting them all out loud.

Judy Williams died on Saturday, of lung cancer she believed was from second-hand smoke, at the age of 69.

She was the embodiment of goodness in an evil world, a sign of light amid the turbid. She was the kind of community institution that a city shouldn’t need, and the type of person who will be impossible to replace.

Who among us can steel themselves against so much horror — the layered trauma of 25 years of proximity to violence — and respond with such compassion?

Ms. Judy grew up in the now-demolished Brooklyn neighborhood and attended Second Ward High School. She started MOM-O as an immediate response to her own grief. In 1993, her goddaughter, Shawna Hawk, was murdered by Charlotte serial killer Henry Wallace.

Hawk’s mother, Dee Sumpter, joined Ms. Judy in forming MOM-O as a way to channel their anguish into action. At the time, they were simply focused on helping each other get by.

For those who weren’t here or those who’ve forgotten, 1993 was a horrifying time for the city, as Wallace raped and murdered 10 women over three years. I was seven at the time. My dad was a television reporter for WBTV, and I remember watching his stories at night as he — and all of Charlotte, for that matter — followed the hunt for the serial killer.

Out of that dark time came the candlelights of MOM-O.

Over the years, MOM-O grew into a strong voice against violence, thanks mostly to Ms. Judy’s persistence. She would roll up to crime scenes within hours of a killing, with the permission of the victim’s family, to hold a vigil. Mourners lit candles and released seven purple balloons tagged with the victim’s MOM-O memorial tag into the air. And, often, Ms. Judy would step in front of the television cameras to decry the bloodshed and make a plea for peace.

“I’ve actually broken down at services, boo-hooed right there in front of everybody, because it seems to be so unfair that these lives were wasted,” Ms. Judy told me. “There’s no rhyme or reason why these people are dead. They’re just dead. Because somebody was in a bad mood.”

After two people shot at each other near a MOM-O vigil at a crime scene a few years ago, CMPD asked Ms. Judy to move her services to Camp Greene Park. “What we learned was that maybe going into communities, not knowing the dynamics of that community, may not be safe for even the people at a candlelight vigil,” she recalled to me.

As she aged, she kept a plastic stepstool in her van, in case she needed to rest during a vigil. She struggled to find the right person to take over her life’s work, she confessed. “They say I can’t get no help because I’m such a perfectionist. But we can’t have crooked ribbons.” 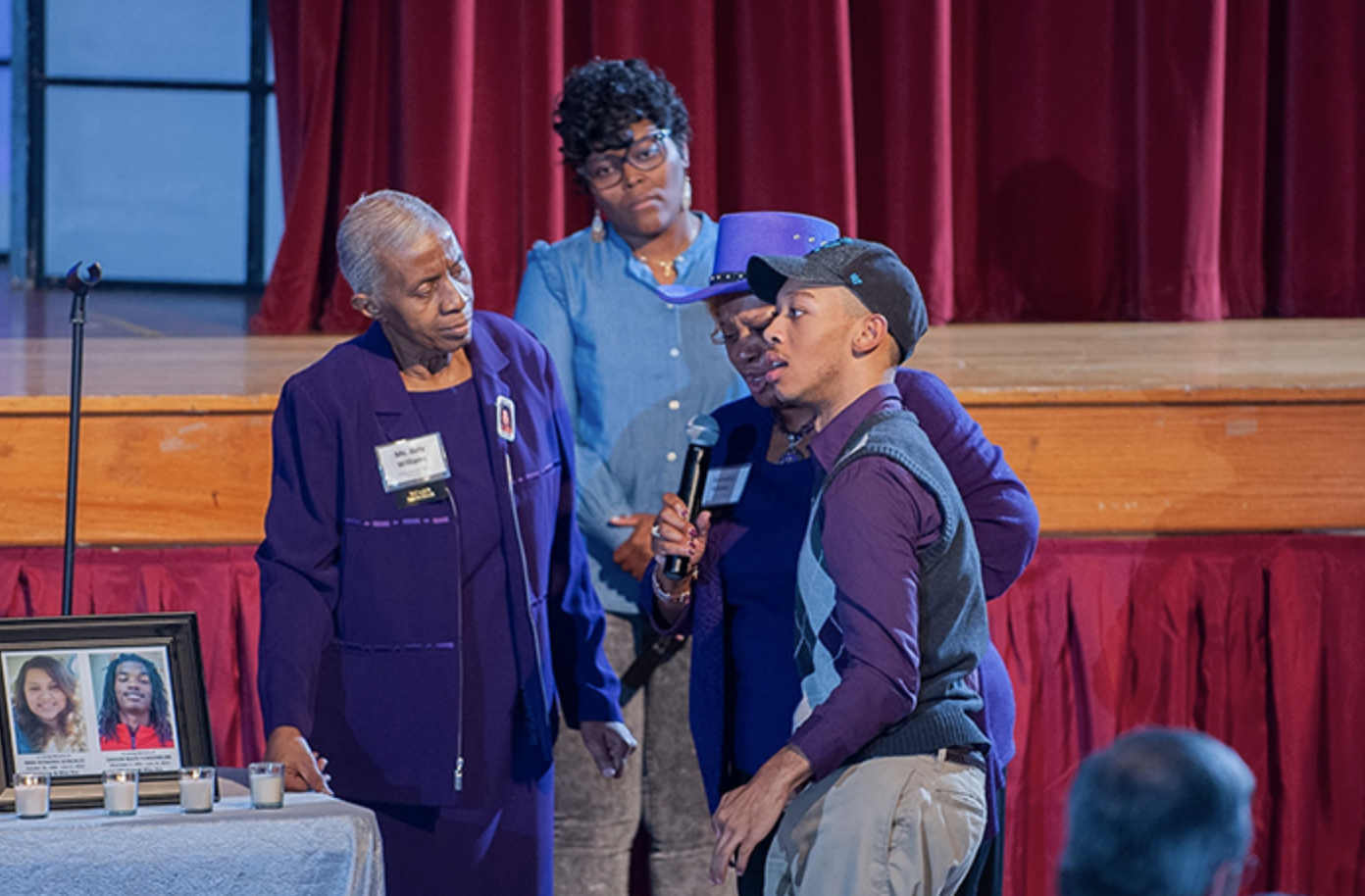 Through the end of the third quarter of this year, 88 people have been killed in Charlotte, according to CMPD. That’s up 11 percent from that point a year ago.

What a shame that is, to know that Ms. Judy’s last year was almost as deadly as her first. But the numbers say nothing about the work she did, and the thousands of families she comforted, in the 27 years in between.

There will be more lives to mourn, of course, a reality Ms. Judy admitted.

“People who are contemplating killing somebody don’t make no big announcements: ‘Hey! I’m getting ready to go kill someone,’” Ms. Judy said. “They just do it. If we can start to get people to think about themselves. Just themselves. And how it’s going to affect them and their family. Maybe we can prevent some.”

When I got the news that Ms. Judy was gone on Saturday, that she wouldn’t be there to hot-glue MOM-O lapel pins for the next murder victim, I thought about the first time I saw her at a crime scene.

Fifteen years ago, a photojournalist and I pulled up to a shooting at Piedmont Courts, a public housing project just outside of Uptown that has since been torn down.

It was a chaotic scene — at one point, when a car that looked like the gunman’s eased into the parking lot, the witness we were interviewing sprinted back inside her home — and eventually the cops came over and told us reporters that it wasn’t safe to hang around. They told some version of the same thing to Ms. Judy and a group of MOM-O mourners setting up for a vigil on the other side of the parking lot. As our TV truck drove away, I looked back, expecting to see the others packing up.

But Ms. Judy didn’t go anywhere. When everyone else turned their backs, when we looked away, when we forgot, Ms. Judy was standing right there. She couldn’t walk away.

Adam Rhew is a writer in Charlotte, a former editor at Charlotte magazine, and former television reporter.

Join us: This story is made possible with the help of Agenda Members. If you’d like to support more reporting, photography, and storytelling like this, become an Agenda Member.